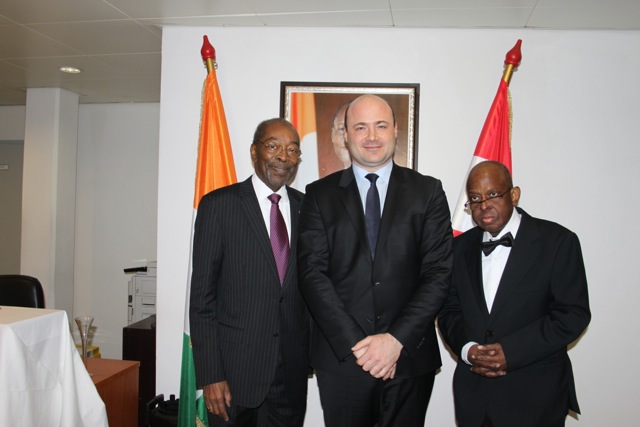 New Year Reception at the Embassy of Côte d’Ivoire 2019

On 29 January 2019 a New Year Reception was held at the Embassy of the Republic of Côte d’Ivoire in Vienna. H.E. Ambassador Roger A. KACOU and H.E. Ambassador Marc A. BANNY had invited the honorary consuls, the executive committee of the Austria – Côte d’Ivoire Friendship Society (ACFS), representatives of international organisations and members of the Embassy.

Dr. Christoph Mayer, President of the Austria – Côte d’Ivoire Friendship Society and CEO of Prosper Africa, represented the executive committee of this society which serves as a platform for the promotion of bilateral relations. In his speech, Dr. Mayer transmitted the wishes of the members of the ACFS, highlighting their role in the ongoing strengthening of the economic relations between the two countries and assuring the next official trade mission of the ACFS’ support.

The ceremony was followed by a meeting of H.E. Ambassador Roger A. KACOU, H.E. Ambassador Marc A. BANNY, Dr. Mayer and others in order to prepare the Austrian trade mission to Côte d’Ivoire (27-29 March 2019).